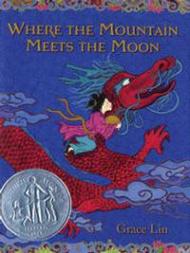 WHERE THE MOUNTAIN MEETS THE MOON is a story about a young Chinese girl who embarks on an adventure–a hero’s journey–intent on making her family rich. After spending her days slaving away in the fields with her parents, eating carefully portioned bowls of rice each night, she believes that her quest to find the Old Man of the Moon will solve all her family’s problems. There’s only one problem with her plan. The Old Man of the Moon is a character from her father’s bedtime stories. Still, perhaps Minli’s adventure is not as crazy as it seems, especially when she meets a dragon who is determined to help her…Although I had heard fabulous things about this book and read raving reviews, I really did not expect to enjoy as much as I did, but WHERE THE MOUNTAIN MEETS THE MOON exceeded my expectations in every way. First, I was thrilled to discover a quest-based story where the girl is the hero. While Minli doesn’t slay any dragons or fight major battles, she does overcome obstacles of major importance. Although her head is filled with fairy-tales, she proves herself to be clever and compassionate as she meets each fairy-tale character. In the end, the darkness that she faces is much greater than any monster from your run-of-the-mill adventure book. In the end, she must choose between her own happiness and the happiness of others. One of the things I love about this book is the parallel arcs between Minli and her mother. In the beginning both believe that money will solve their problems, and by the end they must both face that it won’t.What don’t I like about this book? Nothing. There’s nothing that I can criticize. I won’t got so far to say it’s my favorite book ever. As a lover of adventure fiction, I do prefer the humor and heroism behind books like Harry Potter or Percy Jackson. But I also think there’s something to be said for this softer type of adventure story, a journey that’s based on creativity and clemency rather than bravery and strength. I would recommend this book to 4th graders, high 3rd graders, or 5th graders who want something fund to read. This is a great message for young girls who love adventure fiction, the idea that there are ways to be heroic outside of slaying the dragon. In this story, you wouldn’t Minli want to slay the dragon anyway. He isn’t her enemy; he’s her friend.

Congratulations to the winner of the Book Wars Bracket: The Tiger Rising.  For their enthusiasm and creativity in getting their classroom book selected, each student from Mrs. Farmer’s class chose one FREE book from the book fair (for $10 or less).  I loved to see their excitement, not just over winning the bracket but over being able to choose a free book!

Still not sure what The Tiger Rising is about?  Here a link to the Goodreads page.  https://www.goodreads.com/book/show/37187.The_Tiger_Rising?from_search=true

Rounding up the best nonfiction for children and teens

Find a book to delight a child.